Idukki Arch Dam is one of the largest arch dams in Asia constructed across Periyar river between 2 mountains, Kuravanmala & Kurathimala.

Have you visited Idukki Arch Dam before?

The Idukki Dam, located in Kerala, India, is a 168.91 m (554 ft) tall arch dam. Lying in the heart of Idukki district, the dam is ideally located between 2 mountains – Kuravanmala (839 meters) & Kurathimala (925 meters) and surrounded by lush natural environs. It was constructed and is owned by the Kerala State Electricity Board. It supports a 780 MW hydroelectric power station in Moolamattom.

Technically Idukki dam is a double curvature parabolic, thin arch dam. Idukki dam along with nearby dams namely Cheruthoni and Kulamavu creates an artificial lake around 60 Sq.km in area and supports 780MW hydroelectric power station at Moolamattom power house which is around 43 kms from Idukki dam.

Dam Top is opened to public  only on Saturdays, Sundays, Public holidays and during Onam and Christmas vacation period in Kerala due to the security issues, while boating and Hill view park are open to public on all days. In fact Cheruthoni Dam is the entry point to Idukki Arch Dam. Take Entrance ticket from Cheruthoni Dam and walk towards Idukki Dam Top between two hills Kuravan and Kurathi. One has to walk 2.1 kms one side to reach the magnificent Idukki Dam Top site which is locked between Kuravan & Kurathi hills. Idukki Arch Dam top view is so spectacular and amazing. If we look behind the structure, we can understand the height level where we are standing. 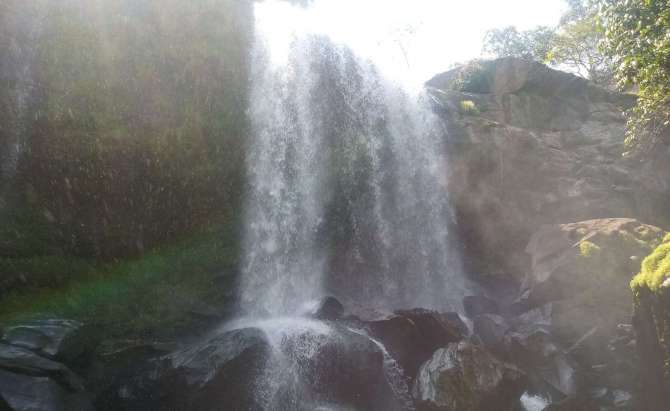 A journey to attukadu waterfalls

Idukki Arch Dam was constructed by Kerala State Electricity Board (KSEB) with financial and technical aid from Canadian government and commissioned in 1976 by then Hon. Prime Minister Smt. Indira Gandhi. It is worth visit for travelers who are really interested in different Engineering structures as this dam is a special kind in its architecture.

Once we reach the Cheruthoni Dam entrance, we can visit Idukki and Cheruthoni Dam Top ( Walking/ Buggy car ride), Hill View Park and also can try our the Boating at Idukki Dam. Parking area is near to Cheruthoni dam entrance, though its very small. This is strictly photography banned area and none of the electronic devices like camera, mobile phones etc. are allowed inside the entrance.

Vyshali Cave : The famous Vyshali Cave (from the malayalam movie Vyshali) is located in this place. If we are walking from the Cheruthoni entrance, after around 1 km, we can take right towards Vyshali Cave. We get excellent view of dam and lake from the top of the cave.

Hill View Park : It is located at the entrance of Cheruthoni dam. After parking cars, there is 5 minutes steep walk, which elders may find difficult. The park is well maintained above a small hillock. There are many shelters available inside park where we can take rest and enjoy the scenic beauty of lakes hills. This is the only area where photography is permitted. Small cafeterias are there with juices, ice creams and local natural chocolates. Worth visiting as a picnic and rest spot. There is a watch tower at park which gives the spectacular view of Periyar lake and both Cheruthoni and Idukki dams. Small pond is maintained for pedal boating purpose.

Idukki Dam Boating : There is a boating center at the right side of Cheruthoni dam main entrance. The boating is completely done by Kerala Forest Department. There is a separate entry fee as well as boating ticket fees.

History
Tribal head of that “Oorali” race Mr. Kolumban was the man who showed the dam site to the Malankara estate manager Mr. Thomas Edattu. The idea of constructing a dam for power generation was first conceived in 1919. As per history, Shri Kolumban, the head of 'Araya' race during 1922, showed the way to the Malankara Estate Superintendent and his friend Thomas, who were on hunting spree in the forest, the spot of present Arch Dam. He told them of the legend of Kuravan and Kurathi Hills. Mr. Thomas was impressed by the sight of water flow between the mountains and it was his idea that has materialized in the form of Idukki Arch Dam. Sri. W.J.John of Malankara Estate submitted a report to the Government of Travancore in 1932 on the possibility of constructing a dam at Idukki for Power Generation.

In 1947, a preliminary investigation report was prepared and submitted by Sri. P.D. Joseph John, the then Chief Electrical Engineer to the Government of Travancore. It was during 1956 that the Central Water Commission conducted a detailed investigation based on the Government's request. The project report was prepared in 1961 and the Planning Commission accorded sanction for implementing the scheme in 1963 and the preliminary works of the project were started.

The construction of this Dam commenced on 30 April 1969. Storage of water in Idukki reservoir commenced in February, 1973. The inauguration of trial run of the first machine was celebrated on 4 October 1975. Commercial operation of the Power Station was Commissioned on 12 February 1976 by the then Hon. Prime Minister Smt. Indira Gandhi. The Government of Canada aided the Project with long term loans and grants.

Thrice in the past, the shutters had to be opened; during the northeast monsoon (October to December) on both occasions. The first time was in 1981 (when the shutters were repeatedly opened and shut between October 29 and November 13) and the second time was in 1992 (when they were kept open for 12 days from October 12 to 23). Third time its opened during the August month od 2018.