Have you visited Jatayu Earth's Center before?

Jatayu Earth’s Center also known as Jatayu Nature Park  is a leading tourist destination at Chadayamangalam in Kollam district of Kerala. This place is also locally famous as Jatayu Rock.

A 200 feet long, 70 feet tall and 150 feet wide bird sculpture of 'Jatayu' a mythical character in Ramayana is the main attraction of the Earth's Center. This giant concrete structure is the largest functional statue of a bird in the world, with an entry in the Guinness Book of World Records. It stands at an altitude of 350m above mean sea level. This creation of Mr. Rajiv Anchal will definietly give a flabbergasting experience to the visitors.

‘Jatayupara’ is a tribute to Nature, sustainable eco-tourism and women’s safety.

The Jatayu Adventure Center provides the largest adventure park within a natural terrain. Rappelling, paintball, archery, zip line, valley crossing, bouldering, trekking, jumaring and wall climbing are among the myriad activities available here. The climbing activities are designed around the natural rock formations on the hillside.

In the Ramayana, Jatayu is venerated as an embodiment of courage, fearlessness and chivalry, as he risked his life to save Sita from her captor.

After abducting Sita, Ravana was travelling to Lanka. On his way to Lanka, Jatayu who has the form of a vulture tried to rescue Sita from Ravana. Jatayu fought valiantly with Ravana, but Ravana soon got the better of him. Jatayu was injured badly and he fell on a rock. When Rama and Lakshmana, who were searching for Sita, met a dying Jatayu, he informs them of the fight between him and Ravana and tells them that Ravana had headed South.It is believed that Jatayu fell on the rocks in Chadayamangalam after his wings were clipped by Ravana.

The giant Bird Statue has been built as an honour to Jatayu who showed great courage at a crucial time.

Near the rock there is pond that is said to have been formed by the stroke of Jatayu’s beak.

The bird-sculpture was sculpted by Rajiv Anchal, a famous a malayalm film director, screenwriter, and sculptor. The rock-theme nature park is the first Public-private partnership (PPP model) tourism initiative in the state of Kerala under the BOT model. 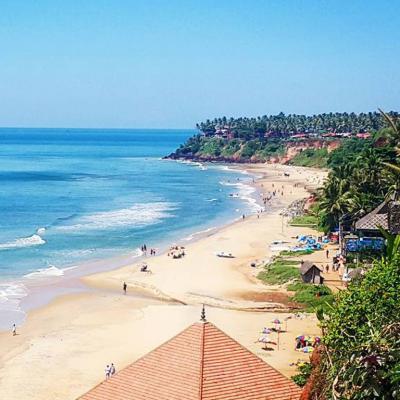