Elliot’s beach is widely known as "Besant Nagar Beach" or "Bessie" and is located in Besant Nagar, Chennai, India.

Have you visited Elliot’s beach before?

Elliot’s beach which is located in Besant Nagar, just a few kilometers from the city, is the second most popular beach in Chennai after Marina. It is ideal for long walks as it does not offer much activity. Elliot’s Beach is quite a hit among the tourists as well the inhabitants.

Elliot’s beach forms the endpoint of Marina Beach shore and is named after the Chief Magistrate, Superintendent of Madras and Governor of Chennai during British time. It is popularly known as Besant Nagar Beach since it is located in the Besant Nagar.  It is one among the cleanest beach in Chennai.

Karl Schmidt Memorial,  a gate-like structure made from bricks is located right at the beach’s sand. The memorial is named after the Dutch sailor who lost his life in the process of saving a girl from drowning. However, at present it is not in a good condition anymore as it has been corroded due to the the salt in the sea water.

Besant nagar is counted as the coolest neighbourhood and tourist attraction in the city. The police outpost is located at the beach to assure safety and prevent drowning cases.

The Ashtalakshmi temple is located in besant nagar, which is around 20 years old. This temple features the goddess Lakshmi in eight different forms spread across four floors ornamented with colourful carvings of mythical figures in South Indian style.The Besant Nagar Velankanni Shrine (shrine of Mary) is located to the right of the beach, and during the Velankanni festival, the beach is very crowded as thousands of pilgrims visit everyday. Sri Varasiddhi Vinayakar Temple, Madhya Kailash Temple ,Theosophical Society and Huddleston Garden are some of the famous places around Elliot's beach which worth a visit.

The beach does not offer much activity and it is ideal for long walks. One can soak their feet in the splashing sea water and lose themselves in the mesmerizing nature. Many snack stalls and restaurants serving authentic South Indian cuisine is situated along the shore.This beach is quiet a hit amongst both the natives as well the tourists of Tamil Nadu. 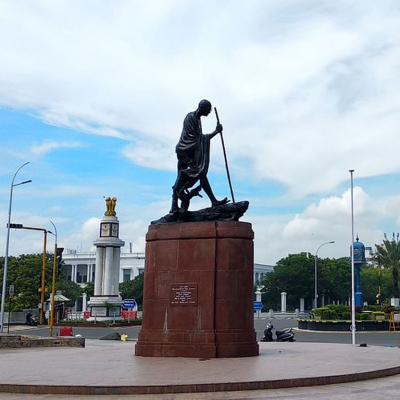